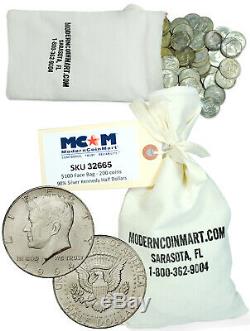 These coins bear the image of one of the most popular American presidents of the 20th century, John F. Kennedy, and were minted the year after his untimely death. Design of these 1964 Kennedy Half Dollars.

The obverse of these 1964 Kennedy Half Dollars have an image of Kennedy facing to the left of the coin. He bears the image of quiet confidence. The part of his hair is visible on the left, and a wisp of it at the back adds to the youthful look. The national motto, IN GOD WE TRUST, is separated by the base of Kennedys neck, which bears the initials GR for designer Gilroy Roberts.

The word LIBERTY arches over the image along the rim, and the year, 1964, is inscribed at the bottom. The image on the reverse is Frank Gasparros adaptation of the Presidential Seal.

Two inscriptions, UNITED STATES OF AMERICA at the top and HALF DOLLAR at the bottom, run along the rim. In the center of the design is a shield, which has thirteen stripes. An eagle guards the shield, spreading its wings on either side of it. A ribbon that is held in the eagles beak and opens over its head bears the words E PLURIBUS UNUM (From many, one).

Thirteen stars, which, like the stripes on the shield, represent the original thirteen states, also arch over the eagles head. Behind the stars and ribbon are rays that emanate from the shield.

In its talons, the eagle bears important symbols, one of peace, an olive branch, and the others symbols of Americas willingness to defend her values, arrows. Why add these 1964 Kennedy Half Dollars to your collection? Each of the coins has. Of silver, which means that the bag contains 72.338 Troy oz. These coins make excellent additions to the stacks of any fan of constitutional silver, but individual coins can also make excellent gifts to any of the many people who have nostalgia for President John Kennedy. We cannot make any price adjustments after the sale is complete. Product Photo Policy: MCM attempts to display product images shown on the site as accurately as possible. We take all of our photos in house and due to reflections on the mirrored or proof surfaces of a coin there may appear to be'black' when there is not. If a coin has a color on it at all it will be described as'colorized' in the description or title. Due to the large inventory we sell, we use stock photos.

Serial numbers will vary from the image shown unless specifically stated in the product listing that the item pictured is the item you will receive. INTERNATIONAL ORDERS POLICY: We are accepting international orders from select countries. These charges are the customer's responsibility. However, we cannot guarantee this due to the volume of orders we process each day. Beyond the 30-day return period, Company is under no obligation to accept return of any product, but may in its discretion do so pursuant to this policy, for up to one year from the invoice date.

ModernCoinMart (MCM) was launched in 2004 and quickly set the standards for online sales of bullion, US coins and world coins. Join over 100,000 loyal customers and feel confident purchasing from a company that's spent a decade building a solid and stellar reputation trusted and recognized around the world. That's the MCM way. 1892 Austria 8 Florin 20 Franc Gold Coin Restrike SKU38605. This listing is currently undergoing maintenance, we apologise for any inconvenience caused.

The seller is "mcm" and is located in Sarasota, Florida. This item can be shipped worldwide.