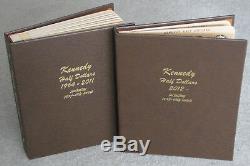 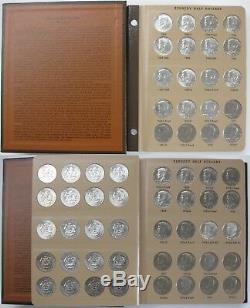 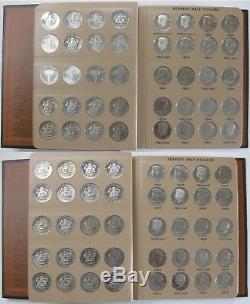 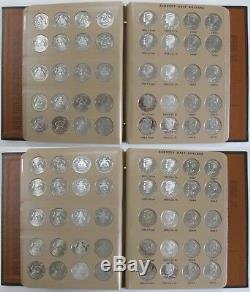 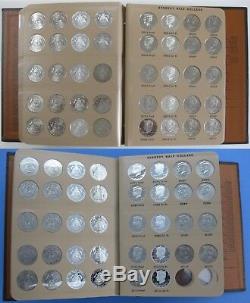 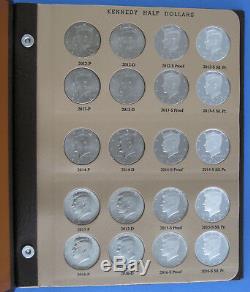 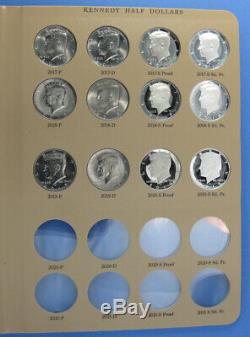 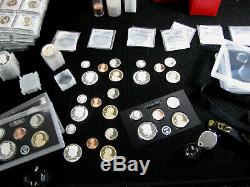 Original Mint Issued 1964 thru 2019 Silver Proof, Clad Proof, Special Mint, & Uncirculated Kennedy Half Dollars. All Coins are AS MADE BY THE UNITED STATES MINT at DENVER, PHILADELPHIA, and SAN FRANCISCO. 190 Coins Total - All are Premium Quality & Individually Selected for this set. Note: all coins come mounted in the two albums as shown in the photos. These are all NICE Coins, All are glove handled and selected from Original Government Issued Proof Sets, Mint Sets & Original Mint Rolls.

(you may or may not get the same set photographed, but the quality will be comparable). NOTE: No proof coins were made in 1965-67.

The 1992 thru 2019 Silver issues ARE included with this set. No varieties such as Double Dies, & 1998 Matte Proof are included in this set.

All the Proof coins in this set were removed from government issued sets, inspected & mounted with gloves. The Proof coins in this set all have highly mirrored surfaces and are high grade "Gem" Quality Proofs taken directly from original government issued sets, and include MANY Cameo's. Please ask any questions before purchasing. 30 Day Return Privilege if not happy for any reason.

Although, on average, the coins from Mint Sets do tend to be of higher quality. There are a couple of notes however. In 1982 & 1983 no official government mint sets were issued (the mint gift shops did sell "souvenir" sets at both the Denver & Philadelphia locations).

Most uncirculated coins from these two years will thusly come from Bank Rolls (beware "almost unc" or "sliders" for these two years). Uncirculated Clad issues from 2005 thru 2010 fall into two separate categories. While no Half Dollars have been minted for circulation since 2002, 2005 marks the first appearance of what is referred to as the "Satin Finish" issues. Contained in Mint Sets from 2005 thru 2010 these coins have a distinct appearance apart from their "Business Strike" cousins that were contained in rolls/bags. Uncirculated Clad Issues from 2011 thru 2019 are generally considered the same either from the Mint Sets or Rolls...

However, the coins contained in the Mint Sets are notably of much higher quality. Government Rolls with US Mint wrappers and Commercial Rolls with String Co. Wrappers overall have the same quality and appearance. Now for the Proof's.

The Clad Proofs from 1971 thru 2019 can be broken down into two groups. The first is 1971 thru 1998 containing 29 pcs. These were all removed from Proof Sets that were issued in the single lens / holders.

All of these issues will have the S mint mark. Again there were no 1975 dated issues. 1976-S Silver proofs were also issued in similar fashion to the Uncs mentioned before. There are two different style mint marks for 1979. Type one is referred to as the blob while type 2 mint marks have a clear & distinct "S".

There is also a 1981 type 1 & 2 mint mark, not included in the album, that I will discuss later. The 21 - 1999 thru 2019 issues all come from multi lens / holder Proof Sets. All will have the "S" mint mark. Spotted and/or badly toned proofs will reduce values considerably. The Silver Proofs from 1992 to date are often broken into 3 groups.

First is the 1992 thru 1998 issues that came in the Government Black Box sets. Many of these sets have been broken apart over the years and mishandled proofs are frequently seen. 1999 thru 2011 Silver proofs come from "Red Box" multi lens government Proof Sets. These are the 13 silver issues it takes to complete Album #1.

Again watch out for mishandled Proofs. The 2012 thru 2019 Silver proofs come from "Black Box" multi lens government Proof Sets. Contained in this group are several of the lowest mintage Kennedy Half Dollars.

The 2012-S Silver proof with a mintage of 445 thousand, the 2015-S at 387 thousand, & the 2016-S at 419 thousand. The price tags on these 8 coins are volatile & can (probably will) change. A complete set of Kennedy half dollars is actually quite a challenge & subject to several interpretations as to what constitutes a "complete" set. Many collectors feel that if every hole in the Album Dansco, Whitman, etc. Is full, & That is all there is. Sometimes a collector can go a bit further & include All the issues that are listed in the Red Book. For a Kennedy Half Dollar collector, that will add several coins that do not have places in the Album. Many, many, of the have what is referred to as "Milk Spots".

68's and cameo's go for more... The strongest double die in the series, underrated & under priced. Usually seen in 63-64 grade.

1981-S type 2 mint mark. Still a mystery to me why this is not included in the Album. Same circumstances as the 79 t-2, a different style mint mark was put into use at the end of the years production.

The lowest mintage non-variety Kennedy Half Dollar made as of 2019. Only about 62,000 minted. This came in a two coin Kennedy commemorative set.

2014 P&D 50th Anniversary 2pc Mint Set. These sets were issued with the coins contained in capsules inside a sleeved holder. 2014 - 4 coin Silver 50th Anniversary Proof Set. Could be a bargain if they ever include these issues in the basic set Album.

Again, about half the mintage of the 2012-S Silver proof Kennedy. A little less than 75,000 issued. These currently trade very close to their gold content. Not a bad way to go.

The above listed coins should be a part of a "Complete Set" at least in my opinion. I carry all of the above in stock & can quote any or all you might want included.