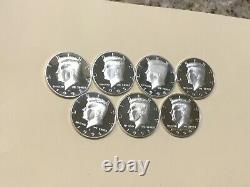 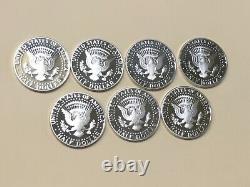 KENNEDY HALF DOLLARS TAKEN FROM SILVER MINT SETS. Grading is subjective so please look at the pictures and judge for yourself. Even though these coins come from the U S Mint, they are uncirculated gem proof and not always perfect.

Some may have spots or natural toning. The US Mint ceased production of 90% silver coins in 1964. Starting in 1992, the mint resumed minting 90% silver dimes, quarters and half dollars exclusively for their annual Silver Proof Sets. These coins are produced to the exact weight and specifications as were 1964 and before 90% silver coins. All of these proof coins bear the S San Francisco mintmark.

The seller is "artandcoinman" and is located in Glendale, Arizona. This item can be shipped to United States.