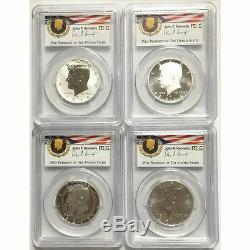 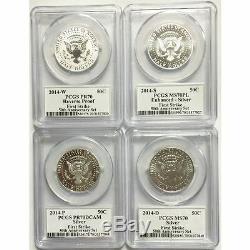 The stars will receive a laser polish technique to accentuate them against the field. One uncirculated coin from the U.

Mint at Denver The rich embossed faux leather folder includes an image of John F. Kennedy from the halfÛÒdollar design struck on the coins in this set and some patriotic U. Mint logo appears on the front of the folder and the Department of Treasury seal on the back. Each set also contains a separate printed Certificate of Authenticity and booklet about the development and design of the Kennedy halfÛÒdollar inside the folder. The four coins with different finishes are encapsulated and secured in coin wells within the packaging.

The coins appear from left to right inside the folder: reverse proof (West Point), proof (Philadelphia), enhanced uncirculated (San Francisco), and uncirculated (Denver). The coins are displayed to show all obverse (heads) sides. The back of each coin can be seen by removing the capsule from the packaging.

The obverse and reverse design descriptions appear on the packaging. The designs on the coins replicate the portrait on the 1964 design: Obverse: The design shows a portrait of President John Fitzgerald Kennedy, the youngest person ever elected to the office. Mint SculptorÛÒEngraver Gilroy Roberts based this profile on a portrait prepared for KennedyÛªs presidential medal.

Roberts created his original 1964 design shortly after Kennedy's assassination. Reverse: The design is based on the Presidential Seal and was done by U.

It consists of a heraldic eagle with a shield on its breast, holding a symbolic olive branch and a bundle of 13 arrows. A ring of 50 stars surrounds the design, which gives this coin the distinction of having more stars than any other United States coin ever produced for circulation. Denomination: Half-Dollar Composition: 90% Silver, Balance Copper Diameter: 1.205 inches or 30.61 mm Weight: 12.500 grams Edge: Reeded Finishes, Mint and Mint Mark: Reverse Proof ÛÒ West Point ÛÒ W Proof ÛÒ Philadelphia ÛÒ P Enhanced Uncirculated ÛÒ San Francisco ÛÒ S Uncirculated ÛÒ Denver - D Each set contains four Kennedy half-dollar coins struck in 90% silver, all are in PCGS Holders. We're committed to meeting this standards. We reserve the right to cancel orders that do not meet the listing requirements. We do not mark merchandise values below value or mark items as'gifts'.

We are prohibited to violate US and International government regulations. We guarantee your satisfaction at Aydin Coins & Jewelry.

All sales are final but we will work with you to address any issues with your product. If for any reason you have a problem, please feel free to call our offices and discuss it with us. We will always do our best to accommodate you. All weights of our products are in troy ounces which is about 31.1 grams.

If your Order(s) is canceled, you agree you have full responsibility and liability to Aydin Coins & Jewelry for any Market Loss. AYDIN COINS is a Division of Aydin Jewelry Mfg. Which is a privately held company. We sell Silver, Gold Coins, Gold, Silver Bars and other metals. We also manufacture 14K, 18K, Platinum and Diamond Jewelry for the jewelry industry.

Our Mission is to provide the best products to our customers and become the leading provider of metal and finished products to the consumer industry and to jewelry industry. Powered by SixBit's eCommerce Solution. The item "2014 PCGS 70 Set 4 Kennedy Half Dollar 50th Anniversary FS" is in sale since Thursday, May 28, 2015. This item is in the category "Coins & Paper Money\Bullion\Silver\Coins".