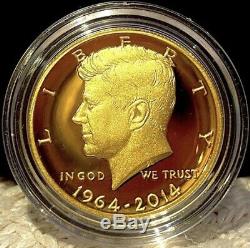 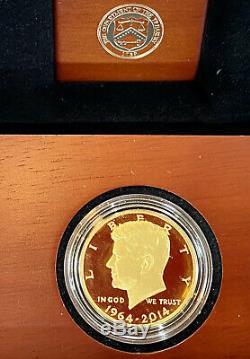 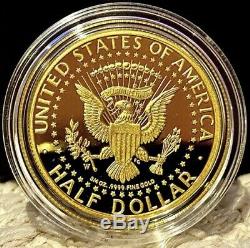 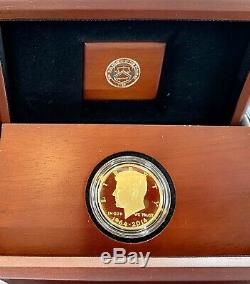 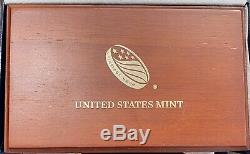 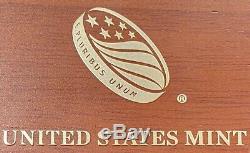 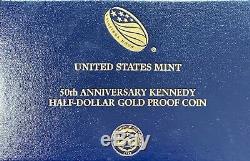 2014-W US Gold Half-Dollar Kennedy 50th Anniversary Proof 50C In OGP GEM BU! This listing is for the COIN in ORIGINAL MINT CAPSULE AND THE OGP BOX AND COA! Commemorating the 50th anniversary of the Kennedy half-dollar, the United States Mint will offer its first-ever gold half-dollar. Each coin contains ¾ troy ounce of pure, 24-karat gold and is struck with a proof finish at the United States Mint at West Point. The obverse (heads side) design of the 2014 Kennedy Gold Half-Dollar depicts a portrait of John Fitzgerald Kennedy, the youngest-ever-elected president. United States Mint Chief Engraver Gilroy Roberts based this profile on a portrait prepared for Kennedys presidential medal. The reverse (tails) design is based on the Presidential Seal and was created by United States Mint Sculptor-Engraver Frank Gasparro. It consists of a heraldic eagle with a shield on its breast holding a symbolic olive branch and bundle of 13 arrows. It features the inscriptions UNITED STATES OF AMERICA, HALF DOLLAR and ¾ OZ.

A ring of 50 stars surrounds the design, which gives this coin the distinction of having more stars than any other U. Coin ever produced for circulation. You will receive the exact coin in the pictures! Actual Metal Content 0.75 troy oz. Packaging: Coin in OGP Capsule, Boxes, COA.

The item "2014-W US Gold Half-Dollar Kennedy 50th Anniversary Proof 50C In OGP BOX GEM BU" is in sale since Friday, July 24, 2020. This item is in the category "Coins & Paper Money\Coins\ US\Other US Coins". The seller is "preciousimportsexports" and is located in Pismo Beach, California. This item can be shipped to United States.