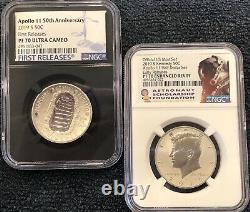 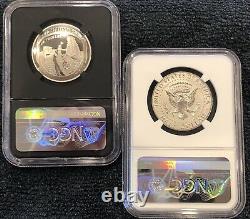 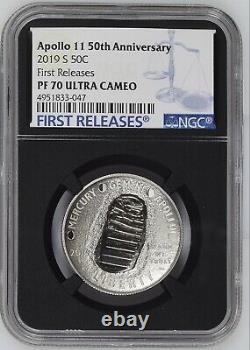 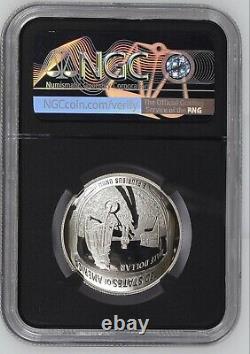 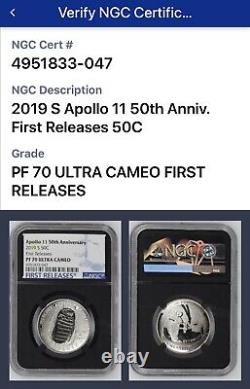 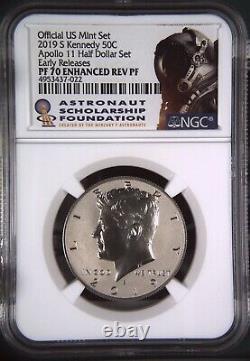 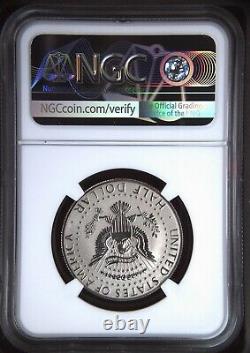 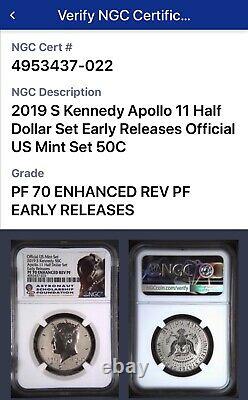 I've done all the work to get these coins graded and you have the comfort in knowing these coins have NOT been cleaned! Why order this Apollo 11 50th Anniversary 2-Coin Commemorative Clad Half Dollar Proof + Enhanced Reverse Proof Set in OGP? Be a part of the United States Mint's celebration of man's first visit to the moon and the part that former President of the United States, John F.

Kennedy, played in the historic event, with this set of 2019-S Apollo 11 Commemorative Clad Half Dollars. The Apollo 11 moon landing is considered by many to be the greatest accomplishment in the history of human exploration.

It was also a major American victory in the space race with the Soviet Union. This set contains one 2019-S Apollo 11 Commemorative Clad Half Dollar Proof coin, featuring the second-ever curved design released by the United States Mint, as well as one Kennedy Clad Half Dollar Enhanced Reverse Proof coin.

Both were struck at the San Francisco mint and feature the S mint mark. This set only has a mintage of 100,000 pieces and comes in the original mint packaging. Stunning Reflection Design of the Apollo 11 Commemorative Clad Half Dollar Proof. The United States Mint held a contest to determine the obverse design of their Apollo 11 50th Anniversary Series and Gary Cooper's work won out.

The Apollo 11 Clad Half Dollar Proof bears this winning design. The top half of the rim features inscriptions of the NASA programs that made the moon landing possible, "MERCURY, " "GEMINI, " and APOLLO.

They are joined by images of the moon in four different phases. In the center of the obverse is a single footprint, a powerful symbol of the accomplishment that harks back to Neil Armstrong's words, One small step for man; one giant leap for mankind. Several other inscriptions are included in the remaining space. Among them is the national motto, IN GOD WE TRUST. The US Mint made this coin domed so that the reverse design would be convex and echo the curvature of the helmet on Buzz Aldrin's space suit, which dominates this face.

The design takes after a famous photograph taken during the moon landing. The largest portion of the helmet is the visor, which clearly reflects Neil Armstrong, who is flanked by an American flag and the lunar module. "HALF DOLLAR" is inscribed in the upper left of the visor. Inscriptions on other parts of the helmet read, "UNITED STATES OF AMERICA" and "E PLURIBUS UNUM" (From many, one). Iconic Profile of Former President John F.

The left-facing profile of the Former 35th President of the United States, John F. Kennedy, appears on the reverse of the Kennedy Clad Half Dollar, struck with an Enhanced Reverse Proof finish that allows the detail of Kennedys face to shine through the coins clad composition.