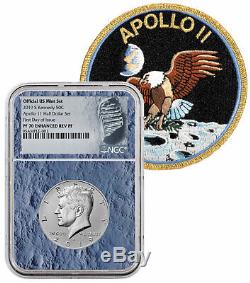 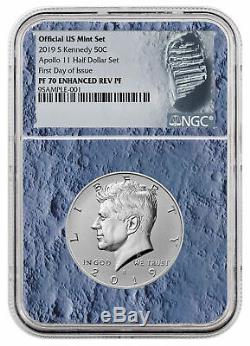 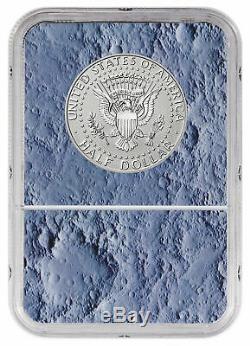 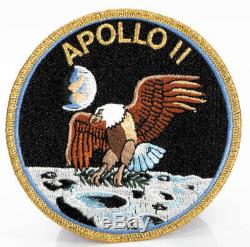 2019-S Cupronickel Enhanced Reverse Proof Kennedy Half Dollar From Apollo 11 Half Dollar Set NGC PF70 FDI With Apollo 11 Mission Patch Moon Core Holder Moon Label SKU57451. This specially assembled set honors the 50th Anniversary of Apollo 11's moon landing in 1969. The set includes a replica of the mission patch worn by the three Apollo 11 astronauts and a San Francisco minted 2019-S Cupronickel Enhanced Reverse Proof Kennedy Half Dollar from the U. Mint's Apollo 11 50th Anniversary Proof Half Dollar Set. The coin is the first half dollar in U. Mint history to feature the dramatic finish. Mintage is limited to 100,000. Iconic Kennedy Half Dollar Imagery, unchanged since 1964. The obverse features Gilroy Roberts' portrait of the President, with an eagle design created by Frank Gasparro on the reverse. Flawless Proof 70 Half Dollar with Moon Core Holder and First Day of Issue Moon Style Label. This 2019-S Apollo 11 50th Anniversary Enhanced Reverse Proof Kennedy Cupronickel half dollar coin was submitted to Numismatic Guaranty Corporation (NGC) for review and determined to be in perfect Proof 70 condition.

For receipt by the grading service within twenty-four hours of release, the coin also earned the First Day of Issue designation on its moon themed certification label. Accompanied by a fantastic replica Apollo 11 Mission patch, the coin is presented in a NGC holder with a novelty core ingeniously designed to emulate the moon's cratered surface. This impeccable First Day of Issue 2019-S Enhanced Reverse Proof Kennedy Half Dollar and Apollo 11 Mission Patch will be an exciting addition to your collection! Specifications for this 2019-S Cupronickel Enhanced Reverse Proof Kennedy Half Dollar From Apollo 11 Half Dollar Set NGC PF70 FDI With Apollo 11 Mission Patch Moon Core Holder Moon Label SKU57451. From Apollo 11 Half Dollar Set.

With Apollo 11 Mission Patch. We cannot make any price adjustments after the sale is complete.

Product Photo Policy: MCM attempts to display product images shown on the site as accurately as possible. We take all of our photos in house and due to reflections on the mirrored or proof surfaces of a coin there may appear to be'black' when there is not.

If a coin has a color on it at all it will be described as'colorized' in the description or title. Due to the large inventory we sell, we use stock photos.

Serial numbers will vary from the image shown unless specifically stated in the product listing that the item pictured is the item you will receive. INTERNATIONAL ORDERS POLICY: We are accepting international orders from select countries. These charges are the customer's responsibility. However, we cannot guarantee this due to the volume of orders we process each day.

Beyond the 30-day return period, Company is under no obligation to accept return of any product, but may in its discretion do so pursuant to this policy, for up to one year from the invoice date. ModernCoinMart (MCM) was launched in 2004 and quickly set the standards for online sales of bullion, US coins and world coins.